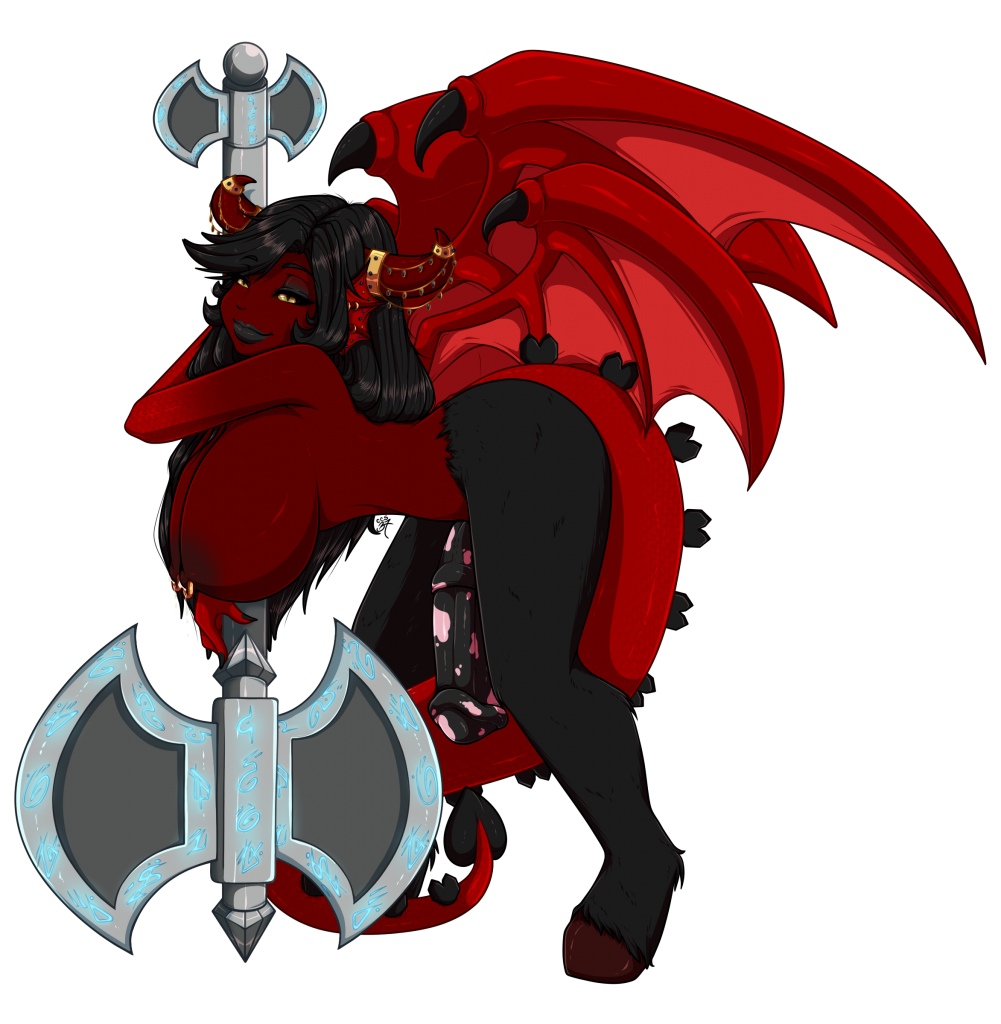 Hey guys, sorry for the long wait on this new public patch! There’s been a lot of work on the game’s back-end over the last couple weeks, but we’ve made a lot of mechanical changes that I think you’re really gonna like — starting with our new Smutbox system and revised Experience progression!

You can play the latest update here or on our Play page like normal, under the Corruption of Champions II header. Remember, if you like what you see, you can always support us on our new Patreon site! Every pledge helps bring awesome new art and commissioned writing to the demonic wastelands! 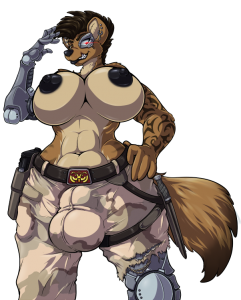 Shou and I will once again be meeting up at Furry Weekend Atlanta, if anyone would like to come say hi, have a drink, and talk lewd, crude, and with attitude. Our panel is Friday, April 6th at 10:30 PM at “Panels Dock 6.” We won’t be selling merch at a booth this year, but we’ll bring some to the panel if anybody wants some spiffy branded flashdrives, buttons, or stickers.

Shou and I will once again be meeting up at Furry Weekend Atlanta, if anyone would like to come say hi, have a drink, and talk lewd, crude, and with attitude. Our panel is Friday, April 6th at 10:30 PM at “Panels Dock 6.” We won’t be selling merch at a booth this year, but we’ll bring some to the panel if anybody wants some spiffy branded flashdrives, buttons, or stickers.

P.S. People ask me why I don’t write more male content. I wrote some mostly male-focused stuff below, and hardly anyone cared. I should clearly stick to more gynocentric stuff.

Here’s a little story I put together to go with a commission I got (and also set up another story to go with another piece of art of my dude I’ve got waiting in the hopper). It’s mostly focused on male minotaur-noxo getting his cyberware hacked to mess with his head and make a fap session even lewder. If that’s not your jam, don’t click to read more! 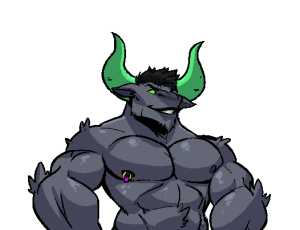 Fenoxo sat down on the couch and eyeballed the datachit. On the surface, it looked like any other universal data-store: matte black with a few gleaming electrodes where it could interface with nearly any machine. The bull-man knew the contents inside to be more insidious. He had picked it up from a trusted contact who promised the high-definition memory-store would provide an unforgettable experience: supposedly some next level memory-data that made getting gang-banged by a batch of New Texan bimbos look like a walk in the park.

Reaching up, the shaggy-furred bull-man pressed at the hidden port on the back of his head where his cybernetic ‘horns’ plugged in. He long ago made peace with their presence.  Just because he had no say in having them bolted on didn’t mean he didn’t appreciate the eventual benefits. Big glowing horns were a conversation starter, for one, and psionic amplification was nothing to sneeze at. Since having that bundle of circuitry laced into his brain, he had gained abilities unmodified terrans could only dream of – one of which was the ability to load properly recorded sensory data to relive on a whim. 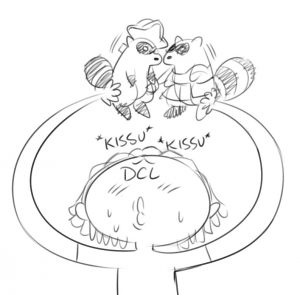 Small one tonight, guys. Been doing a bit of writing for that goblin I mentioned earlier, so nothing to code just yet.

Image is an old sketch someone doodled (mighta been Tsuda) of DCL’s lust for Kiro/Kally content. 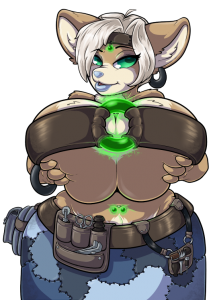 Maja isn’t completely done, but Garde’s gotten her most of the way there. You can run into her on the very bottom of level Korg’ii Hold, if you haven’t visited her just yet. I’m going to work on either filling out the rest of the rooms for the bottom level or setting up Lund to work with the translator. Whichever happens first. 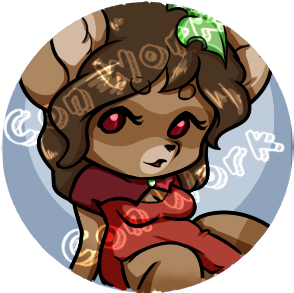 So, I’ve gotten more than a few questions about what happened to the Bust Trello, I figured I’d make a short post here to let you guys know that it hasn’t vanished off the face of the planet, relax.

So to those who were wondering, no, you guys didn’t do anything wrong. We just don’t want Trello shutting us down because of high bandwidth due in part to wonderful people who couldn’t stop fapping to our delicious delicious arts. (;3) I appreciate everyone’s understanding over this, and I hope you guys look forward to some of the things we have upcoming.

I’ve got a couple of Busts in the works (Kattom Osgood and Yoma), and I know Adj is working on a few as well. We’ll be making another appearance at Furry Weekend Atlanta [April 5-8th] this year, so you guys should stop by and see if you can’t find us! (No booth this year, but we will have a panel!) Fenoxo and I will be happy to see you guys once again!

My work week thus far has been sub-par, partly because I had to drive across town to handle some tax stuff today and partly due to a shortage of sleep on Monday. I’ve still been poking at Mitzi here and there. I also spent a little time adjusting the breast description system to handle milkiness better. It should only say “milk-filled” if you’re actually full, and will throw out some alternatives you’ve been drained dry.

You have two milk-filled tits

You have two empty mammaries

Then again, I was still slogging away on the weekend. I’ll try to get something more fun out this week for sure. 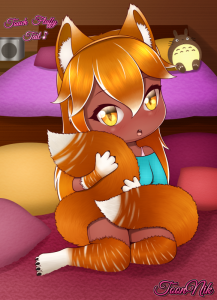 Okay not really Fisianna. More like Jacques00. You know what? I’ll take it.

Don’t get used to Saturday night patches or ‘nuttin! <3 Fanart of Fisi by ToonNik!~

Today I coded a piercing system. It’s more advanced than CoC’s but still quite limited. The piercings have full item stat blocks and can be equipped or removed (unless it isn’t designed to be!). The item can be “multiple” piercings – like “a pair of nipple rings” or single “a nipple ring”. Only one piercing item can go in a single slot. There’s a tag set up for doing piercings with a nipple chain, but chaining together discrete piercings won’t be a thing.

Right now, we’ve just got Lund’s trophy piercings, which I will probably have increase the odds of encountering male Milodans in the wild.

I’ve also been poking at Mitzi the mind-broken goblin bimbo-slut, a follower you were supposed to get post final dungeon in CoC that I’m going to try to write in a way that allows her to exist in TiTS or CoC. I figure the sex scenes will be about the same, the only differences will be some of the intro texts… but then again, my bimbo lust is kind of spilling out of hand. I’ve spent way too long writing different sexy outfits for her to wear.