May 30, 2021 Savin
ArtCorruption of Champions
60 Comments

May 25, 2021 Savin
ArtCorruption of Champions
69 Comments

And now for a very cute addition to your camps, anywhere you may tread:

Well, the air conditioning in my office is out. It got hot enough for one of the grip pads on my mouse to separate the other night. I still managed to chunk out more Azariah, but I must flee back to the respite of my laptop for now…

May 18, 2021 Savin
ArtCorruption of Champions
84 Comments

It would be a shame to have a priestess of the fertility goddess, and a beautiful motherly elf at that, go without a chance to prove her devotion with her body. I’d definitely consider this one of the big highlights of our Mayternity push this year, clocking in at well over 100 pages of content!

Oh, and for mobile users: if you’re having trouble getting the game to load — update Android Webview and/or Chrome. That seems to fix things.

Heyo, I have to say, resorting all the bugs from the bug report forum a second time took longer than I expected given that we had most of the new ones handled already. So, in light of that I’ve fixed a bunch more and pushed one last public patch before I dip into shoveling hot new content out for the backers.

Image-embedded version available! (Larger version of the game that includes the ability to zoom in on character busts and has some images directly embedded into the game. Requires stand-alone flash player.)

It’s midnight here now, so instead of coding the Azariah stuff for backers tonight, I’ll have to poke at that tomorrow, assuming I’m not eaten by family responsibilities. (Edit: It looks like the patch deployment system was broken when I wrote this, so the update got delayed a bit…) Figuring out the various issues with Kiro recruitment burned more time than I thought. Who would have thought having an NPC that:

May 15, 2021 Savin
ArtCorruption of Champions
75 Comments

Time for the public component of Mayternity, with a new pregnancy for vag-havers and a gimme for those of use not so into preg stuff via Skow.

Look forward to Elthara and Miko pregnancies still upcoming, among others! Now if you’ll excuse me, I’m digging back into Mass Effect: Legendary and Resident Evil 8! Having a blast with both of them!

Well, our old web host hurried us along by randomly imploding this morning. What you see now is the new server. It comes with a fatter pipe to more easily pump out all that thick, juicy content you’ve come to expect from us and our games. Of course, it’s not all positives. This surprising turn of events put a few kinks in our tentacles:

In the meantime, I can still link you guys to the image-embedded version .swf for the bug fixes I did last night, if you have a stand-alone flash player to open it with.

Thank’s for bearing with us!

Well, I got a patch out today, even if I got a fraction of what I wanted in it. I’m gonna go lay down somewhere and lay into fixing bugs for another public patch tomorrow.

And now I think I’m going to flop into a beanbag chair. G’nite!

P.S. If you like B’s writing (author of Frostwyrm, Paige, Azariah, etc), he’s got a game of his own over on his Patreon called Equivalent Exchange that heavily features asset theft. I’m told he added a new slime-girl and a character customizer, if you’re interested.

Of course, you can always support us on Patreon or SubscribeStar!

May 7, 2021 Savin
ArtCorruption of Champions
84 Comments

Of course, we couldn’t let Mayternity go by without a contribution from me myself, so as a bit of a surprise — a companion that’s long been requested to get some babytime can now take as good as she gives! 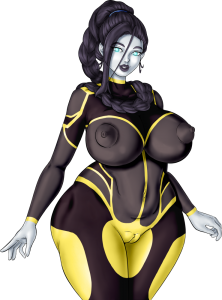 Well, first off, the new host has had me in “validation” for a several days at this point. I’ve been waiting almost 48 hours for a response after giving them the requested documents. Working with the internet is suffering some days.

I’ll go ahead and give you guys a report on TiTSdev since it’s been quiet. After dealing with some issues for a week that I literally can’t discuss here (sadface emoji), I got back to proper dev work on Monday with some hip-shattering goodness for dick-enabled Gianna. This scene is already over 4,400 words and getting longer by the day. I want to squeak in a third set of messy orgasms and a bit of aftercare before I finish it up. I’m thinking the total will clock somewhere in the 5-6000 word range.

I’ve also been collaborating with Morgore to get new bust art for her – including a variant where she changes her skin pigment into the SteeleTech outfit – for all the different size variants of her bust. We also got some art for the futanari variants, likely to be displayed in the appearance screen only to keep the bust variant count under 50.

Savin is still writing more Syri stuff I heard. William is chipping at his own backlog now that it’s grown to match Savin & I’s.

More excitingly: Gedan has save import largely working. I handed her a small pile of saves I collected from working on bug reports, and she was able to get most of them to import without issue after adding an “export” option to her local flash branch. After this week’s meeting we were discussing the possibility of making the WIP version of the JS port available to backers, even though many systems still need to be rebuilt inside it. Soon ™!

P.S. The next patch will be public and come out early next week. Thank you for your patience and support.