Alright, so I’m going to be quick since it’s going to be late, and I don’t have much smut-time on Saturdays. It doesn’t help that I struggled with some potential food poisoning that put me down for about 4 hours Friday. I wanted to have a nicer blog post up that afternoon with this patch.

I reviewed about 20,000 words of submitted content this eve – including some absolutely ripe stuff involving Kiro requesting you to give her some big zaps from any ‘Slut Ray’ you might have (by QuestyRobo) and the first 10,000 words of post-recruitment Penny stuff from B. Both have come along swimmingly.

Sorry about the lack of art, but I’m doing all this from my laptop. Don’t wanna wake the wife! Have a great weekend~

P.S. I’ve been poking about at a blowjob-giving minigame. I’m not sure how deep I’ll go with it, but the start feels promising. 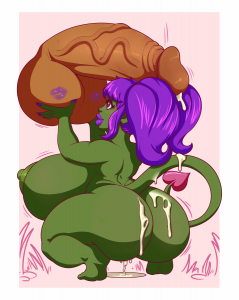 Mitzi worshipping a very, very, very big dick drawn by MrPink and colored by our own lovely Shou! 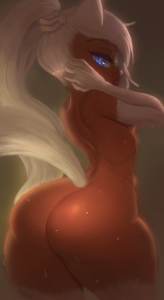 The UI for the powers still needs a lot of assets added in, but for now, enjoy.

Just a heads up that I’m hearing a lot of reports that the newest Chrome update is finally killing in-browser flash for a lot of people. If for some reason it hasn’t, prepare yourself. It will.

You can either  grab a standalone flash player to open the .swf OR grab the adobe air version we have nicely packaged with an exe to play the game. Just download the zip, dump it into a folder somewhere, and run the .exe. 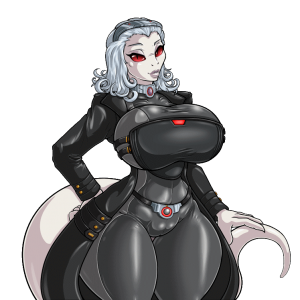 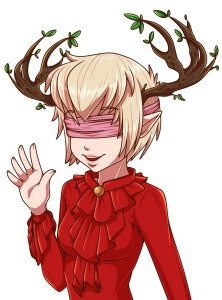 When I started working on TiTS, the “Creature” data type, descriptor functions, and appearance screen were some of the first things to get cobbled together (along with character creation). At the time, I intended the appearance screen to be usable by any “Creature” in the game, not just the player character.

That never happened, because if I had done so, I would have probably doubled the lines of code in order to do with it – having variants with “you have” and “[target.heShe] has”. As of a few days ago, there were approximately 4,300 lines of code in appearance.as.

I finally did it. Of course I leaned on ternary operators so as not to bloat the linecount, but I can now feed any NPC (with properly set statistics) into the appearance function and get an appearance similar to the player character’s. It was a real bear, believe me, but some of the hilarity I discovered when testing almost made up for it. 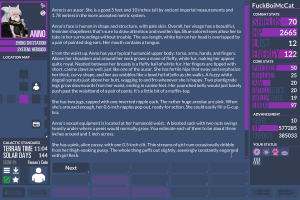 For instance – did you know that Anno’s statblock had balls? When I made her, I started from a copy/paste of Syri with some edits and apparently forgot to give her a thorough neutering.

What’s the advantage of doing all that extra work? Well for enemies with fully fleshed out stat-lines, I can add an appearance button that lets you take a more exacting look at their body that the single paragraph of fluff. It also sets the stage to more easily display highly customizable NPCs if I ever go that crazy.

Oh, and I wrote a new scene for a Zheng Shi enemy and coded in Tessa’s bust too.

This is a re-imagining of another story I wrote a long time ago, which you can find here. More over the next few days as I finish off the ending.

You can find anything and everything for sale in the lower wharfs of Dragon’s Gate. Hundreds of longships from around the northern sea came to the city to trade. It was no surprise that the biggest city in the world would be a nyx’s call to every gold-hungry merchant captain on the waves, but a different kind of market also grew in the furthest shadows of the Red Queen’s towering palace. A hive of tight-packed shops and watering holes where common sailors, drunks, whores, and thieves gathered to ply their own brand of trade.

Cáthe had been one and all of them during her long life, but tonight she counted herself among that last group: a thief on the prowl. Though the most exotic flesh, treasure, and narcotics switched hands in the back alleys and smokey taverns of the low wharf, her quarry was of a less tangible sort. For once her belt was heavy with the weight of her pouch of coins, but that just made her a target for the rest of her kin. Cáthe kept a hand firmly on her belt, flinching towards her dagger each time a wobbling drunk or laughing harlot pushed past her in the crowd.

Her contact was supposed meet her at the Golden Cock tavern. It was easy to find, she’d been told: just follow the smell of overdone perfume and sweaty sex up from the wharf. He hadn’t been lying, at least in that regard. True to the name, a great big gold-painted metal rooster was bolted over the door. Over that stood a woman on a balcony, bent over the railings with a pair of big, rosy breasts bare and swinging as a swarthy northman took her from behind. Hers were hardly the only moans coming from inside, just the loudest.

“Classy place,” Cáthe grunted, pulling up her cloak’s hood as she passed under the copulating couple. “Good advertisement though.”

[Public] How Can You Kill That Which Has No Life? 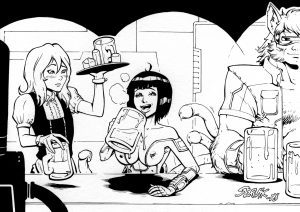 Art of Servik’s captain Steele getting a quick drink between adventures.

…or in layman’s terms: Fenoxo ain’t dead yet. I might be phlegmy and crusty, but I’m still kicking. Not 100% good-to-go yet, but being clearheaded for once is a welcome change. I spent the afternoon sorting through a number of code submissions that had backed up while I was out (and a bit before). Most are for fixes. One is a decent chunk of new content.

So long as there aren’t any game-breaking bugs, this will be the last public patch for a while. 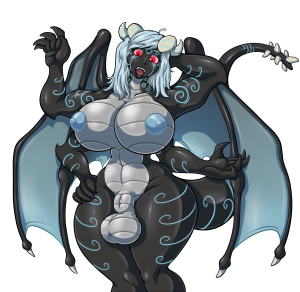 I got locked out of my blog account for the weekend. Came back and there were like 50 messages backed up in the Need Approval queue. Sorry! I might as well make a blog post about this rather than just pinning an edit on Fen’s so it doesn’t look like we’re all dead here.

For once, I’m actually fine. I just don’t make blog posts much because I don’t have anything interesting to say.

On the TiTS front: Fen’s still pretty sick. I think he’s been pecking at a cybernetic catgirl when not ejaculating from the nose. I’m writing about a science dragon dickgirl for Zheng Shi, along with her sexbot companion. Got like 5 scenes done, including a bad end, with one or two to go next week. I hope you guys like stacked, MILFy dickgirls cuz you’re getting a twofer on ’em here.

On the CoC2 front: Transformative items work now. Patch will be forthcoming when there’s a UI for actually using them. I think the first one coded in is gonna be a fox-folk TF, from the sound of things? Drake got his wisdom teeth pulled so he’s coding on a buncha drugs but I’m sure it’ll be fine.

Art of Nykke by Adjatha. I commissioned B! to write some more ~intimate~ scenes with the eldest frostwyrmling because I am a filthy degenerate. This is the adorable result.