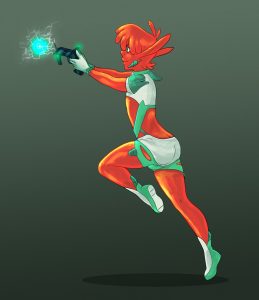 Lots of goodies in this build. Check it out~!

There would be more if I hadn’t spent so long on Miscreant Manor. That sucker clocked in at almost 12,000 words (approx 1/4th of a young adult novel). Oh well, that completes most of the Offbeatr custom scenes I have to do (outside a few too vague to act on). I’m going to be pivoting and working on things like custom items, ship combat stuff, and the Amazon Treatment variant next, I think.

Art is a drawing by Aritimas of his GaloMax-dosed Steele!

I’m coding this stuff tomorrow, you can count on it.

(Oh, and I had a slight sinus infection Sunday, but I think I whooped it.)

Xpray drew these for me as art for the image pack ages ago, and had one posted in his gallery. People have been after the others for a while, so I thought it would be a good idea to go ahead and share them with you guys via the fancy-pants backers-only system. Smack that link above if you wanna see furry herms.

I couldn’t resist the WoW dungeon pun. I apologize for nothing.

I’ve just about hit 9,000 words in this scene, and I still have to write quite a bit more – namely text for a generic dude jumping in for sloppy seconds, orgasm blurbs for six different NPCs in your mouth, a brief interlude/epilogue where it talks about a bunch more people using you, and an outro. I figure it’ll easily pass 10,000 words by the time I’m done, but it should make for a highly repeatable scene. Seven different NPCs can get first dibs on your pussy and six on your mouth.

It wouldn’t be too hard to throw some more in if Savin or somebody gets crazy and wants to write some, but I imagine nobody else will want to run down this rabbit hole with me. It’s basically grown to the size of a combat NPC encounter. This is what happens when I overachieve on custom scenes!

I’m sorry this is taking me so long! Only slightly, though. I’ll try and drop a new build by Sunday for backers. Non-backers – keep waiting. New shit always comes early in a new month, but I know saying that won’t stop you from asking. I look forward to telling you to read in the comments section. 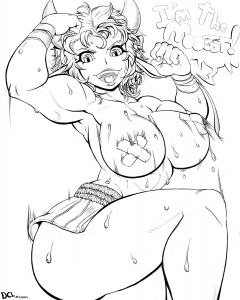 Surprising literally nobody, the Nursery’s been far and away the most popular vote on the poll. While the poll’s not technically closed yet, I’m already mostly finished with a basic skeleton of the Nursery that should be code-worthy by week’s end. There will be a lot of room for expansion once that’s in, but it should give content authors the framework they need to start producing content for it.

I also recently put together some random events re: Anno appearing at various bars across the galaxy, added new Terensha talk scene that Fenoxo forgot to add to the changelog last time, and roped together edited versions of every Steph Irson episode the PC will be able to buy as on-demand video for later. Busy busy. There’s also that new foursome I wrote which Gedan’s hooked up, ready for next patch. So many puppysluts! The bad news is Geddy’s other shiny game project just went into super ultra crunchmode, so the code front might be a bit slower for the next little while.

Oh, and for those who didn’t catch it: I ran a very… special… two part Pathfinder event about a bunch of bimbo cow-girls going on an adventure (and guest-starring Shou and SomeKindofWizard — read Fen’s last post to see what she’s working on for us!). You can watch their hijinx on my YouTube (and grab the adventure notes off my little tip-jar Patreon <3).

Hey guys, Fenoxo here. I guess I ought to touch bases again. It’s been a while, and you guys are past due for an update!

So without further ado, let me prattle on about the relatively insubstantial things I’ve done, like writing another 1,500ish words of public usage stocks for New Texas, or Savin’s bubbly huskar scientists that are ready to be coded for Uveto. You know, the usual fare.

Or I could tell you guys that we’re gonna make a visual novel.

Whoah now! Cool those thrusters, rusher! Before anyone gets too excited and/or angry, lemme go ahead and clear a few things up about. Neither Savin or I are writing it – a friend of ours going by the handle “SomeKindOfWizard” is going to be tackling the writing. SKoW has written for a few VNs that are already on Steam, and she chipped a scene for our July 4th “Freedom Bison” event.

What else about it? It’ll be a side-story in the Tainted Space universe about a down on his luck rusher trying to put together a proper crew and scrape together a decent paycheck. The goal is to produce something that’s “safe” for work enough for steam, with the option of having an unofficial patch for anything too Steamy for Gaben to handle. Does it sound pretty rad? I think it sounds pretty rad.

The first poll using the new system is over; congratulations everybody who voted, you just won yourself a dragondong’d dragontaur as the third rescue agent for Uveto. The idea for her is already roughed out, so I’ll get some stuff coded from out of the backlog and then write her too!

Also, the next poll is up- this one should give us a good indication of what you guys consider the most important out of all of the major systems we’ve still got to add, and hence, which ones we should focus on sooner rather than later. You can vote on multiple options, just not all of the options, so throw down whatever it is you prefer and we’ll see what happens. 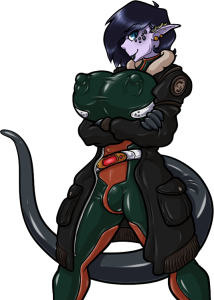 I didn’t do anything for this patch besides change the build number. AHHHHH!

That’s it for now. I wrote another page or so in my free time while making fun of Batman Vs. Superman with Third. Good times. Also pooped out a lil’ youtube video where I ramble about crowdfunding over Mighty No. 9 footage. Worst. Crowd-funding. EVER.

Just touching bases on what’s up real quick before I go to bed. I kept putting off a new build and blog post because I wanted to get the last custom scene finished before putting it up. Buuut that scene is dragging. I wanted to do a highly variable scene where the PC can be gangbanged by like, five to seven different characters with different text. Because of this, writing is going a bit slower than normal (mostly from the resulting burn-out of writing seven ways to stick a penis in a vagina).

I don’t really do much work Thurs/Fri during the summer (my weekends are weeeirder than Cthulhu’s anus), but I might just push out a build tomorrow evening with some stuff Gedan coded… and wrote herself! Carnal Souls really missed out by not picking her up.

Let’s see, what else should I mention?

I’ve just got done adding some more stuff to the backer build page. Expect some tweaking to happen over the next day or so once we figure out everything on our end, but the Save Editor should now be available on there for Offbeatr backers that previously had access to it.

We’re also trying out something a little extra too. We’ve been using a build server to better reproduce game builds and do all the packaging and such automatically. As a benefit of that, we get a build every time we make changes… so we’ve decided to make those available too. Only pretty high-tier Offbeatr backers will have access to it now whilst we figure out how to dish out access to it, as well as make a few other changes so that the builds properly identify themselves for sake of bug reporting clarity.

Also I finished writing and coding a subby, chubby bearman for the bar in Uveto. I’ve been told it’s rather gayyyy~

Also, if you like things that are cool and good you should go check out this other thing I’ve been working on; NewRetroArcade: Neon. Peep dis vidja :V