Caption Contest IS OVER

I’ve seen some great entries thus far and will definitely be putting one of my own together to sling up on the site with the winners announcement!

So a long time ago, when CoC goblins were basically a twinkle in my eye, I got PZero to do me some art of a goblin… and was inspired to do a caption of it myself. Tamani was birthed from this little exercise, creating one of the game’s more infamous and beloved characters.

I’m quite fond of captions. I used to lurk in the caption threads on then ‘chan’s /d/ board back in the day and prowl around for them. To me, a picture with a story is a thousand times more enticing and more interesting than bare art alone. It’s one of the things about Dmitrys’s work that I’ve always loved. I’m not sure who did the writing that accompanied his pictures, but I enjoyed it.

Now I’ve bumbled into some goblin-themed captions over on a certain booru that I really enjoyed, and I thought, why not incentivize our lovely community to produce some of our own? There’s certainly enough art! 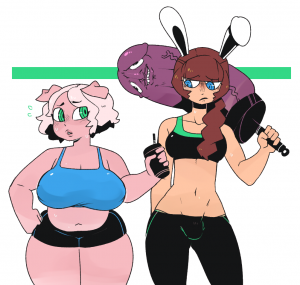 I’m working on a big lizard dude by the name of Chaurmine that hangs out on Tarkus. Got about halfway through his document today. I want to throw out a new patch tomorrow with his first big chunk of content. There’s just four or five sex scenes to toss in and wire up, then a little polish to go.

Then I’ll put out the patch.

Gats did some redraws of his old CoC characters – Lottie the pig-girl and Artemis (who I assume is his PC). Not sure how Exgartuan wound up as a sword.

If you’re using Chrome and having issues opening my games, consider switching to a standalone flash player. Alternatively, you may do the following, but be aware it may leave you vulnerable to flash exploits on other websites in the future.

You need to go to your address bar and type in ” chrome://plugins ” without the quotes. Tell chrome to always allow Adobe Flash Player to run.

Chrome seems to be slowly phasing back their internal flash plugin, resulting in the browser behaving as if it cannot open some flash files. I hope this helps!

Note: This leaves open to any flash-based browser exploits that may surface in the future. 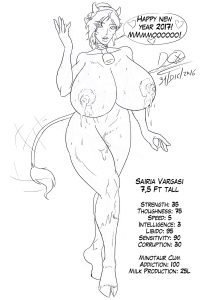 Destructor posted this lovely picture in Adjatha’s stream the other day, and I figured it was a good way to break in the new year. There’s also a sluttier followup piece.

I reviewed some event submissions today (despite being my day off), and I’ll try and get some more out tomorrow. Now to pretend that celebrities will stop dying because the year changed.

Hey all, it’s been a while since I got to post something that relates to CoC! The lovely folks over at VIP Captions were apparently inspired enough by CoC to make a comic rendition of it. Note that it is a CG comic and heavily features male to female transformations at the present. It also takes a few liberties with the storyline and characters, but it looks like it’s going to be a fun little adventure. I hope they wind up going through the whole game.

Now to go back to slowly slogging through all the things I have to review before I can get back into doing any TiTSwerk.

P.S. There’s a small gallery of comics up on smutosaur if anyone is interested. 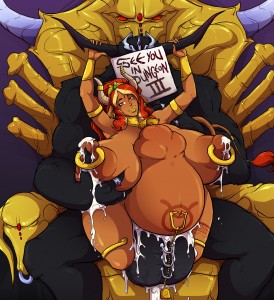 I nearly forgot that Blackheart had commissioned some lovely art from Sparrow to post when the third Dungeon went live!~

Gedit: Also a bunch of CoC fixes just went up. 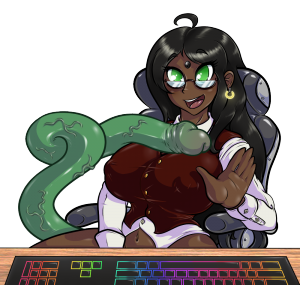 For those of you have that follow CoC, I have some good news: word from Gedan is that the final Lethice encounter should be ready for a buggy release sometime this weekend. Chances are there will be balance issues, typos, and things that outright glitch out the game. It should be a fun time, (hopefully).

And everyone says I abandoned it. FUR SHAME!

Buuut, it’s the weekend, so I probably won’t be coding that stuff till Monday. Have a great weekend everybody!

P.S. Adjatha did some lovely busts with variations for Atha, so those will be in the next patch too (along with new Terran and SynthSheath episodes in the archive)!

Holy crap, Jacques00 had a huge pull request lined up for us to sort through. The biggest changes that’ll be noticed are the options to turn off save confirmation prompts and save notes, if you don’t want to futz with them.

I sorted most of it last night (with Gedan’s assistance for the wigglier bits), and got it merged in this morning. Now I’m back to working on that goo transformation. Thanks for the patience! 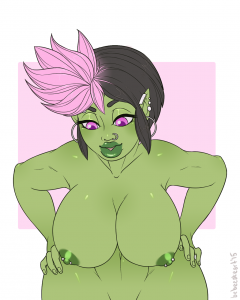 Hey guys, Fen here. I’m just knocking out some work on the final Dungeon stuff for CoC before I jump back into endless slime development. I didn’t get the epilogues or that Lethice bad-end I wanted to do finished last week, so I’m bashing the former out now and giving up on the latter for now. She’s still got a pretty sweet bad-end from Savin anyway.

I’ll be posting links to the documents for the final dungeon on the forums for fan editing over this week, then handing them off to Gedan to code as time permits. I’ll let you know when we have something close to a release date figured.

Tamani sure looks excited! Art by bebecake on HF for a fangame someone is planning to make.

Update: Wound up jamming out a lot more epilogue stuff than I intended today. About 4,000 words of stuff. Got texts for going back home, attempting to purify Mareth, or ruling in Lethice’s stead. All I have left to pump out is the high corruption variant of taking Lethice’s place.

We’ll still have more to add – I know Savin and I want to add additional blurbs for the more notable NPCs, but this is a damned solid foundation, IMO.