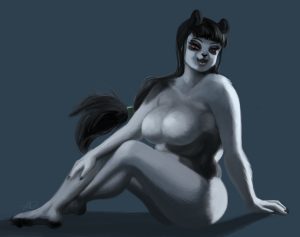 New night, new build, right? This one is smaller than what I hoped, but two new scenes is still cool, right?

For the Jade scene – you’ve got to do “intimate” things with her four or five times, then pass time somewhere outside of Tavros. You should get an email to trigger it. If you turn it down the first time, it’ll disable forever. If you go through with it, there’s a random chance after seven days or so that the scene will happen again.

74 Responses to [Backers] You’re My Dumpling