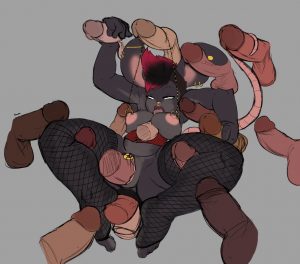 Today I reached back into the backlog a bit for something that was thrown at me several times already – Taurico Venidae. Unfortunately, the name’s a bit long to fit on the inventory menu buttons, so I added the slang name “Deerium” to it. Hopefully Wsan won’t kill me for butchering his writing. I also slapped in a new variant for the penis expansion scene and overall retooled bits to actually work.

So there you go, you can be a deertaur if you want. Males get horse wieners because that’s how it was written, and I’m not gonna argue with that. Lady-types get deerginas of course.

Tomorrow I’m going to toss in a… different… Jade scene in that I had submitted, take a poke at some of Zeikfried’s work, and probably review some stuff on the event submissions board. Oh, and you guys ought to grab Titanfall 2. You can beat the campaign in a day, but I don’t think it had a single moment that I didn’t enjoy the absolute fuck out of. And it’s 33% off. And “Titan20” gets you another 20% off. Must be selling like shit.