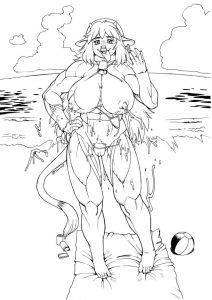 In other news, we had to make the github repository private. It was being used to generate backer builds for non-backers. I wouldn’t have minded so much if it was just skilled individuals putting their knowledge to work for their own benefit, but when automated builds reflecting every code commit we do are floating around in a bookmarkable archive, I guess I have to do something about it. If you’ve committed code to them in the past and would like to regain access to it, please feel free to post about it on the forums with pertinent details.

Art is a fan-commissioned piece of Amazon-Treated Reaha by an artist who goes by TRUMP.