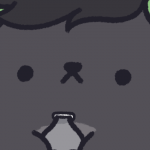 So we put a videogame in your videogame!

How many times have I made that joke on this blog? It’s a lot. Definitely a lot. I’d apologize for it, but I’m not sorry in the slightest! I am sorry that having houseguests for what amounts to two weeks has slowed the rate of coding, but I was still finding some time to pound on the old Cherry MX switches and get work done. The new bit for this patch is a 60+ page VR mini-adventure you have to complete in order to proceed during Kiro’s recruitment.

It was slow to code as it required all the transformations to be applied to your statblock in the end instead of during – which also meant a lot of extra work for things like genital routing. I’d have to check “pc.hasCock()” and also things like “flags[“KQ_VR_LLAERWYN”] == 2″ or whatever, since (SPOILERZ!) some of the events can give you additional genitals. The bust artists are going to have their hands full churning out all the graphics for these NPCs, though I’m tempted to use some old Helia art for one of them…

There will be another public patch tomorrow with a bit of late Halloween content from Gardeford and some other odds and ends.

47 Responses to [Public | TiTS] We Heard You Like Videogames…