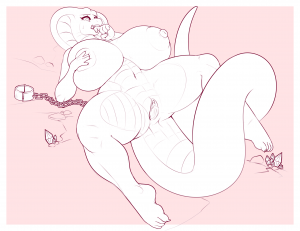 Did you think I forgot about my promise? I didn’t, but first, let me mention another game I promised I’d give a shout: Cloud 10. I played around with the demo the other day myself, and it shows a lot of promise. It leans into a similar sort of form as CoC, but the way they’ve wrapped its random “explore -> get encounter” loop for sci-fi is quite well done. Nonesuch, a writer who has chipped in exceptional work since the mid-days of CoC, is the lead writer, and it shows. It’s also got some scenes from a small selection of other TiTS-approved writers that I’m not going to try to list right now but that I wish were still writing for TiTS. If it’s to your liking, consider giving their Patreon a few bucks.

Whew. The text game space is getting more crowded! It may be bad for my wallet, but it’s good for my boner. That’s a trade I’ll take most days… as long as bills aren’t due. (And hopefully Nonesuch’s own Patreon-fans can keep convincing him to do TiTS commissions here and there. The man writes tentacles like nobody’s business – except the tentaboners’!)

105 Responses to [Public | TiTS] Part Two: Now With Another Beej