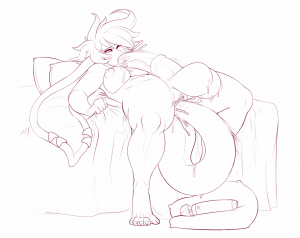 Shekka going to town on herself by Mr. Pink!

I know public patches usually drop a few days from now, but I’m going to go ahead and push this one out now since any other additions are going to be gated behind me actually writing something. Of course, that’s easier said than done. I have no writing projects near completion, and I’ve been dealing with a moderate depressive episode on and off for the last month or two that makes it hard to slip into the right head-space for churning out arousing words (at least, as reliably as Fen of old).

I’m going to step away from trying to make myself write and code things for the next couple weeks and just try to relax and sort out the entire, massive backlog of user submissions, maybe do a bit of coordination with my employees and community writers to line up a patch in the meantime (or add to a bigger patch when I’m back at this full on).