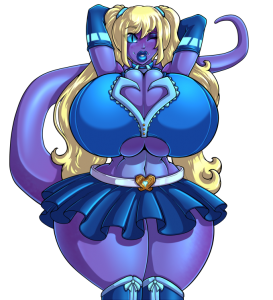 For those who have followed Trials in Tainted Space since the very start of it all, back on Offbeatr (an adult-themed Kickstarter that is no longer in operation), we got some hype from the incredible Doxy, an artist of great skill and talent that I was ecstatic to be able to work with. He’s responsible for the design of Zo’dee and went on to like her so much that he spun her off into her own comic.

Now that his latest game (Sexena: Arena Tales) is about to launch on Steam, I’m happy to announce that a familiar CoC1 character may be making an appearance inside it – and that I’ll be working on inserting a Sexena reference encounter into TiTS via one of the VR stations in a future patch! I’ve added a link to their steam store page in the sidebar, so if you’d like to give it a gander, it’s right over there!