Hey guys, those who have been with us for a while have probably noticed that Shou hasn’t turned out any new busts for the games in some time. She’s been dealing with a lot of things, and 2020 being what it is, the hits just keep coming. The text below is copied from her discord announcement. I’m told the stream should start around 3pm tomorrow. (Presumably during eastern time.) 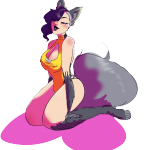 Hello my darlings! For those of you who haven’t heard, my dad had his right leg amputated about a week ago. So I’ve been planning to run a donation for him, I’ll be doing a 24 hour-stream tomorrow show-casing some games I like, and just hanging out and even playing some d&d. But the end goal is to try and gather donations for my dad so I can pay to have hand-controls installed into his truck – and maybe on his tractor as well. If you can’t donate, a boost to social would be great too!

I’m personally going to be chucking $500 in the pot. I’ll see you all there!

UPDATE: IT OVER! (GOAL REACHED!)