[Backers] Time To Turn The Paige On This Chapter of TiTS 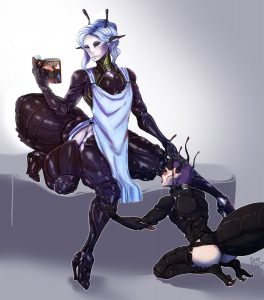 …By which I mean Paige is more or less complete. As mentioned before, her sparring content is not exactly as her author originally envisioned, instead replaced by a simple minigame that rewards learning her tells. Once Paige gets her eyes back though, you’ll find her a more challenging foe who sometimes avoid choreographing her next move…

Thanks for your kind patience and support as I have slogged through over 200 pages of content on this character. I’m going to apologize in advance for any bugs, typos, or errors in scene routing ahead of time. She was a real behemoth with a lot of little widgets to tweak and adjust, and I’m as certain as a Throbb-addict’s boner that even her author missed a few tweaks and adjustments that probably need made to account for her follower status – we can clean those up as they’re reported.

Remember that while I try to run through all the content I code, there’s many things that can go wrong. We need you to report bugs (via the bug report forums) so that we can make the game better for everyone involved, especially new players. Thank you, and <3.