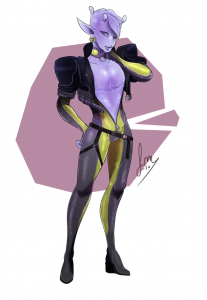 I’m still working on the Pexiga uplift quest… It’s a bit of a behemoth. Not only does it have two fights, but they come with convoluted-as-hell mechanics like the ability to have the NPC pump you up with silicone in one of four different places, then suck it out afterwards.

And there’s still another NPC fight to set up, but I’m going to get the first half all linked up and working properly before I dive into the back half. …Then there’s still two massive variations left. It’s probably not going to drop until next week. Tuesday at the earliest, I think.

This is what happens when Fen tries to churn through 100+ pages of complicated content.

FubMistress over on the forums did some AMAZING concepts of Rahn that have chosen to take on masculine appearances. There’s a few variants in the thread to check out!