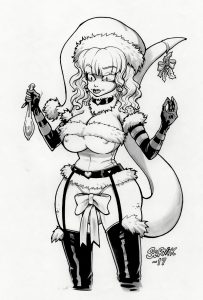 Happy Holidays to everyone of every faith and culture! If you don’t have a holiday, that’s cool. You get presents anyway. Despite a busy weekend that kept me away from a computer most of the time, I managed to finish grading up all the contest entries from the contest and even code a short event Savin wrote up for the season. U

I know I said I was gonna stop dumping Servik’s art up here, but I couldn’t turn down a seasonally appropriate Aliss!

P.S. Savin and Adjatha are still finishing up grading. Once they get done, I’ll run the scores through the sorting hat and see who gets to Hufflepuff their way to first place. Thus far the scores have been surprising. Now I’ve got to run – these stockings aren’t going to stuff and hang themselves!