[Backers | TiTS] Not The Patch You Expected 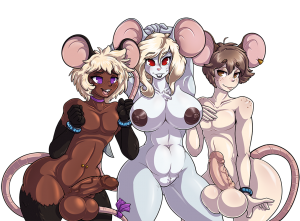 You might have expected this patch to be the one with the final boss of Zheng Shi, but you were wrong! That project is going fairly slowly, owing to the massive number of variations within some of its scenes – some of which are cool and support things like tailcocks. Other variations are smaller and more mind numbing, like the following passage I’ve constructed as an example: “Your rigid cock{s} plowing into {his/their} mouth{s}{, your balls battering {his/their} chin{s} with a {weighty/chunky/yogurt-flavored} load}.”

You get the (slightly embellished) idea. It’ll create a great end-result, but it is SLOW to churn through.

Luckily, our community coders have been slowly putting some coded submissions into the repo for use in game. Here’s a nice chunk we’ve gotten ready for you guys.

Great work guys! I’m going to try and enjoy my weekend and keep chipping at this boss battle when I have time. See you fellas next week for the end of Zheng Shi’s mainline quest progress!

84 Responses to [Backers | TiTS] Not The Patch You Expected