Note that the new goblin enemy introduced in this patch is different from the one I’m working on. We’ll have two gabilani foes on Dhaal soon enough, and a clothing vendor not too long after. 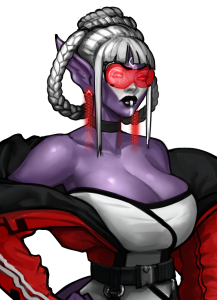 I’m pretty sure I’ve shown off the CEO of Utopian Skies before, but I’m doing it again. (Drawn by Jojocite)

If you like what you play, consider backing us on Patreon or SubscribeStar!