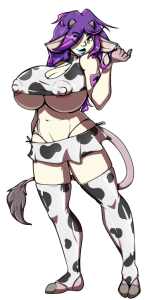 This cow was the favorite of most of the dev team. Good work, Shou!

…but she doesn’t have the scene where she properly milks you coded yet. Sorry guys. That’ll come tomorrow or Saturday, depending on how badly life wants to dog-pile me. It’s bad enough I spent an hour and a half getting some quarterly tax information for Tennessee figured out today.