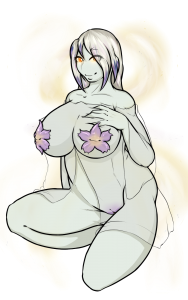 Things will slow a bit over the holidays due to necessary time with family, but I have no plans for any actual vacation. There’s just one small step left to Emmy’s quest to do after this that’ll cost the PC a fair few credits (and unlock a few more sexy scenes I have to write). Oh, and I still need to write text for bringing her a gem satchel and code another variation Zeikfried wrote.

I’ll probably look at spending what time I have free over the holidays on chipping into the backlog. Emmy can have a break now that I’ve put some more effort into her. Did you know she’s over 40 pages long now?

Fungal Queen bust courtesy of Shou (and also added to the game).