Things are coming along with the Punk SecOp I’ve been writing. I finished up the vagina-having victory scene the other day, and I’m partway into the penis-having one. Additionally, William is chipping in a victory scene for taking the female Punk SecOp (they come in male & female varieties) to pound town. And of course, I streamed and coded for a solid chunk of hours this afternoon. You can view the results of that effort below. 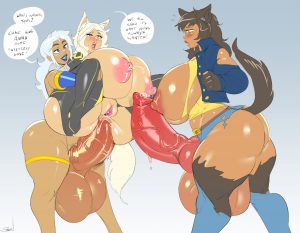 Art of Syri and Anno in a 3-way by Dsan, and commissioned by QuestyRobo.