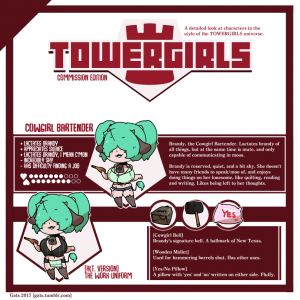 Hopefully I can dump some interesting conversations in there and spin up the translator stuff by early next week. I also want to reintroduce her cave sex options under the guise of “roleplay.”

Geddy is still working on the .exe wrapped for local downloads. I’ll keep you posted if there’s a significant delay or hangup that prevents us from deploying it.

Ciao, and happy weekend! (Art is another Gats tower-girls commission of Brandy.)
Slight post tweaks made by Savin :3