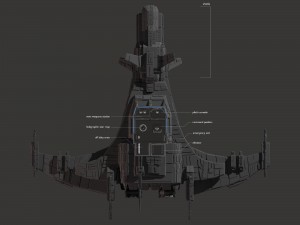 I’d like to apologize for this week being kind of dry on the blog post front. I’ve definitely let some of the comm relays drop offline, and frankly, that’s unacceptable. Fortunately, we’ve been busy little raskvel back here. A brain-trust of our best and brightest has been looking over the Phaedra II planning document (formerly called Xandam), and Zeikfried promptly skewered half my ideas. Still, we’re laying some good groundwork there to have an alternate starter planet with a little more plot to it than Mhen’ga.

As an example, one of the ideas involves fighting your way across post-apocalyptic big-rigs driven by aggressive hyena tribals. Yeah, Mad Max and fallout influences will definitely be felt there. No actual writing is done for yet, of course (aside from a few Codices), I’m too busy jamming my face into Emmy’s crotch and hoping that I can find a completed quest somewhere in there. Last night I managed to work out 1,000 words or so of stuff to set up the last stage of her quest. I might be making it slightly more complicated than I originally intended.