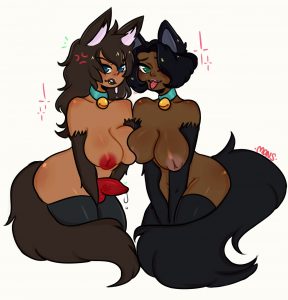 Hey guys, I finished up the pregnant raskvel from Azra’s tarkus mission the other night (Adj started her bust today!), but after seeing some writers disappointed about their backlogged work not being reviewed, I took a crack at parsing through a bunch of them – one that was given to me as a pre-coded pull request included. I also sorted three three or four others, including one that’s more of a weapon re-balancing attempt than anything else.

I like that last one, but I’m going to spend some time putting my own spin on it. The spreadsheet is a great start, and some of the new items suggested seem pretty cool. If I can do that tomorrow afternoon, I’ll try to push it out for backers to play with.

Erra and Syri by Limonsitolewd