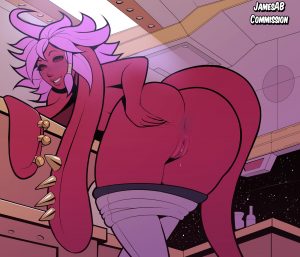 First off, there’s a Halloween contest running right now. Rules and such are as posted over yonder.

I’m pleased to say that I’ve been writing since shortly after 9am this morning and produced 4,100 words of content, most of it for losing to your cousin’s bodyguard. It’s currently split between two different loss scenes, one of which is triggered by losing in a certain voluntary way in combat. Now if you win, I could have your cousin show up with a jetpack and a gatling laser to strafe you as cover for his underling to escape… or do some proper scenes this time. I’m going to aim for pounding out two of those on the morrow, which should have me ready to plug it into the game at the door to the pirate base’s secret ship.

Of course I still need descriptions for the rest of the scaffolding deck, which I will endaevor to add along with this fight. If nothing else I should be able to churn out 6-7 of them in short order. I also need to rework the forge-hound into a one-off optional miniboss in the forge deck, and probably give him some nice drops as a reward for taking him on.

37 Responses to Update on Update