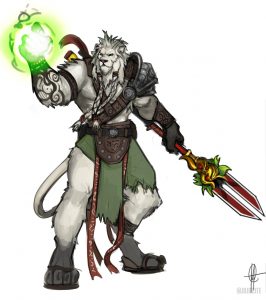 Fenoxo here! I started work on the extremely lewd Lion transformation I’ve been kicking around in my head for the past few months, lightly inspired by a recent OC/D&D character design (pictured at right, drawn by Jojocite.) The document is sitting about 4,000 words thus far, though it’s largely all different orgasm variants based on being in public or not and/or flooding whatever crotch-covering clothing you’re rocking. I’m hoping this project comes out about like laquine ears did, but a little less hopped up on over-time-procs.

I’ve also reviewed a submitted nursedroid for Dhaal from Fr0sty (Tessa’s author). She’s got a fun little twist on the V-Ko/Vi type of robot that you’re likely familiar with from Mhen’ga or Myrellion. I won’t spoil her yet, though. Right now, I’m cranking on code for her. Assuming I can keep cranking out work like I have today, she’ll be ready for a patch tomorrow.

There’s also a new fiction story for those with Kase that I secured permission to add to the game from Night Trap (that was written years ago). It’s loaded and ready to go.