Fen snagged the gravcuffs in one hand and thrusted. The force alone was sufficient to lift Linera off the ground and produce the distinct outline of his bulging, over-swollen cock in her once taut midsection. Lust and anger swirled together as he pounded away at her sopping, draconic cunt, his every stroke producing gushes of mixed pre and pussy-juice.

She had dared to fuck with his head! Her devilishly clever code seized control of his cybernetics, turned his psionic powers around on him, and filled his mind with nothing but desire and affection for the curvaceous dragon-girl. This was all her fault! She’s the one that made his cock ache incessantly at the thought of her pussy! She’s the one who’s lingering programming had compelled him to track her down across entire star systems. Three days attempting to untangle his brain wasn’t enough to shake the desire to sink hilt-deep in dragon-pussy from his psyche, but it was enough long for him to seize control of it and make it his own.

She had been standing there grinning expectantly when he arrived, and he had played along with her, pretending that the flaring psychic emanations from his horns were beyond his control, that he was pumping his cock and balls, inch by inch, without a hint of control. There was a certain thrill in acting on the faded instructions, to be sure. Pouring his power into his bestial prick was always a delight, and the sensation of his nuts heaving in his sack, pulling the skin taut, never failed to disappoint. On this point, he was happy to obey the residual programming.

Grabbing her wrists and spinning her around wasn’t in her plans. Neither was clapping on gravcuffs or tripling his pheromone production. Or putting her in heat. Or triggering her ovaries to dump a year’s supply of eggs into her womb. She wanted a docile stud to fuck her on command. She should have been careful what she wished for. The things Fenoxo was doing to the dragon-girl’s body were going to make it hard for her to think of anything but being fucked for a very long time.

Peeling Linera’s jumpsuit away was almost too easy. Her puffy gash was already dribbling in excitement when he thrust into it. It came as no surprise when she climaxed from the first thrust, soaking his balls in liquid bliss, baptizing him in her heavenly feminine scent. The slick inner folds squeezed and caressed while the dragon-bitch’s eyes rolled back in unthinking ecstasy, her nipples jutting forward, all but begging to be squeezed. He could almost forgive being compelled to find her.

So Fen took to pounding her harder. He gave in to his most bestial instincts. So what if his subconscious was making his horns flare with psychic power, if his balls were so heavy that every slap made them slosh and churn? He could handle his cock pouring a solid stream of pre, and so could Linera. After all most of his powers were coursing through her, jacking her hormone production through the roof and prodding the pleasure centers of her brain to grow thousands of new linkages mid-fuck.

The bulky minotaur’s nose flared, and his bicep strained with the effort of supporting Linera’s increasingly weighty tits. Gravcuffs or not, the scaly slut’s increasingly breedable body started to weigh heavy on him. Yet his spiking, ever-growing lust lent him strength. Fen growled low, ignoring the fervent pulsing of his nuts, and slammed home again and again. Each pussy-stretching stroke stuffed more pre into an increasingly packed womb, and the contact of his sheath rubbing on her clit was enough to make her squirt herself silly.

Neither of them noticed the growing puddle around Fenoxo’s hooves.

Against everything he told himself before he came here, against his better sense and his knowledge of what this woman had done to him, the hyper-aroused beast-man allowed his dick to grow enamored of Linera’s sloppy cunt. He liked the feel of her. She felt like a girl who practiced for the chance to wrap herself around a big fat horse-cock. She was tight and warm, and the way her muscles quivered in the midst of her frequent orgasms made his balls tingle and swell with freshly brewed sperm. 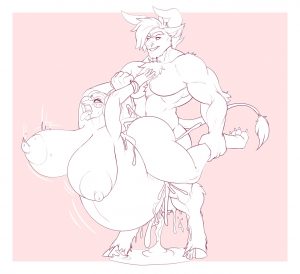 By the time his second ejaculation started, he realized he couldn’t be mad at her any more. He couldn’t stay angry while she was taking his breeding so well. He couldn’t be angry at a girl whose lashes fluttered so cutely. It was like her pussy was sucking the rage out of him, like he’d brewed it all up into the biggest, heaviest cum-load in the galaxy, and he was giving it to her, one cunt-flooding spurt at a time. The rounder her belly grew, the more he wanted to cradle it. The more he pumped inside, the more the corners of his mouth rounded in a smile.

Fen groaned and staggered, rubbing at his head. A weight had been lifted for sure. Lingering mental programming and anger alike had been satisfied, even if… his balls were still swollen and his dick was still twice as thick as usual. The huge member twitched and dribbled as his balls swayed, heavier by the second. Just how virile did he make himself? His prick answered by flaring and slopping out more pre to spatter below.

Linera, the scaly mynx, was just too damned sexy! While the minotaur was busy assessing his supernatural stockpile, she had climbed up onto her haunches, letting her cum-pregnant belly flop onto the ground to support her. And instead of getting mad, she simply ‘churred’ in pleasure and groped her motherly tits, the areola fat and sensitive with lust. When her eyes turned back to Fen, they were empty of all save desire. 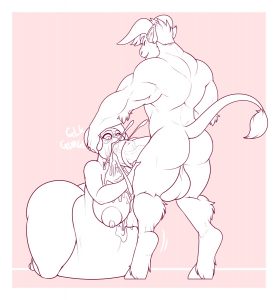 How could he resist the implicit offer of her open maw? How could the beast-man hold back the rampaging need that coursed through him, demanding he fuck her mouth until he managed to somehow impregnate her tonsils? He grabbed her by the horns and thrust in, spraying pre-cum like a wide-open faucet. Linera went wide eyed in surprise and arousal, but her cunt gushed even as her cheeks flooded. She wanted it.

Assuming he hadn’t recovered enough to revert the changes.

But that could wait. Fen’s balls were feeling increasingly full, and the dragoness? With her nostrils all but buried in his sheath, she was in heaven. The minotaur had performed perfectly. Fucked her exactly like she wanted, even if the amount of eggs being fertilized in her belly was a bit of surprise. She could deal with that after the lovely, sticky meal he was force-feeding her.

32 Responses to Laying the Dragon