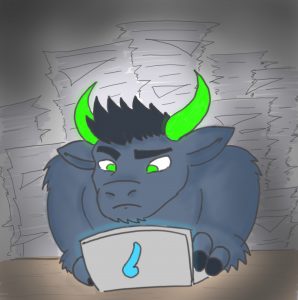 Frogapus made the cutest picture of Fentaur trying to work on a teensy little 13″ laptop… and can anyone actually use those comfortably? They’re awful.

What’s new? Well, we have two pages of plans for an extended tutorial dungeon that’ll take place on the way to Mhen’ga to hopefully better introduce a number of the game’s more complicated mechanics (and give a bit more sci-fi “taste” before dumping the game into a jungle full of primitives). The TL;DR version is that something goes wrong on the way to the gate, and you have to land at the closest “abandoned” mining platform and scrounge a part for repairs. Of course, it’s never quite that simple….

Now on to ze patch!