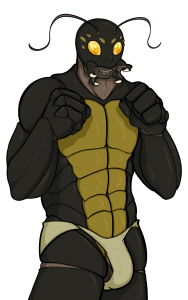 Hey guys, some of you might not noticed when I was talking about delays, but I did slip a “Release Candidate” build for backers on the sly in my previous post. Well, we’ve beaten off (hah) some of the most egregious bugs and turned out a new build to continue to play with. Note that there are still lots of bugs with the recent combat system refactor, so fights may crash, look weird, or otherwise slit their own wrists.

Oh, and I slipped in another wall of content for some of the older characters in the game. Dr. Badger can ask you to bimbofy Penny for her. It’s pretty great if you like that stuff. But don’t fret – if you hate the badger, you can tip off Penny and start a path to turn the tables. Now I just have to get into coding the “turning tables” stuff.

Oh, and I don’t have a hard date on when the free build will be available. The raw .SWF builds will hit Patreon and TaintedSpace.com in a bit. I’m still holding off on mobile builds till we get something a bit more functional – and the play link on TaintedSpace.com will go to an older, more stable build still. You have to cherry pick from the downloads menu.

Pictured is the new Wetraxxel bust from Shou – which she posted just before I started putting this patch together. It’ll be in the official 0.6.25 release later in the week (hopefully).