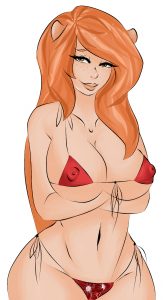 The Zil Callgirl’s pregnancy xpak has been finished. It’ll probably need to wait for the nursery before implementation, but I don’t imagine that’s very far away at this point. Expect some new interactions, a name for her, and repeated breeding action.

What’s next? Well, when I finish off a big thing, I usually cleanse my palette with a couple quick small projects to space things out. I churned out a targeted testicular TF on a lark last night: Nuki Nutbutter, which grants the Nuki Nuts perk without having to become a space-faring trash panda. I’ve got a partially-finished new robotic friend on deck next: Siegwulfe, a tauric companion droid.

Finishing off Reaha’s Cured expansion is the next major project to tackle. Or get back to tackling, anyway. With Fen out of town, I’ll try and pick up the slack on blogposts (and maybe some writing/coding streams) throughout the week.