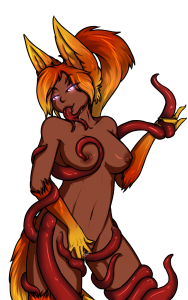 Not really much to report on my end specifically — other than that oh boy oh boy Deus Ex is unlocking in a few minutes whooo (I totally didn’t forget all about it until I just “pre-ordered” an hour ago, nope). Between that, D&D, and a real important doctor’s appt. tomorrow, I guess I’m glad Tuesday/Wednesday is my normal weekend.

Nobody in FenCo keeps normal hours. Buncha weirdos, us.

That said, everyone else has been up to some seriously cool stuff. I’m told there’s Some Kind of Wizard that’s been working on some kinda Visual Novel thingy, and that the writing is in its final stages. Holy balls that was fast — more like some kind of machine, the way she turns out the words. I’m jealous.

Geddy’s building up the code front for VNprojekt, of course. And, somewhat more immediate to my interests, is wrapping up the coding on The Kashima Incident, this year’s Halloween adventure. It was supposed to be last years, but we had the fun and sexy Masque and all instead, so now we get to thaw out  Safe and Mundane Adventures in Space! 😀

Meanwhile, Shou and Adjatha are crankin’ them busts out, including the rest of the Kashima busts, a Tarratch dude with some amazing-looking armor, and a new Saendra bust that is just…. uuunnffffff. So good. Speaking of which, Totally Fine and Not at all Infested by Space Parasites ausar girl by Shou. Which is totally not for the Kashima Incident. Because that adventure is totally going to be fine and nothing bad will happen to you on it. It’s fine.