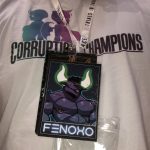 Now that I’ve had a chance to sleep in own bed for the first time since… last Tuesday? Damn, it’s been a while! Anyway, I wanted to talk a little bit about my time at Furry Weekend Atlanta (or FWA as it is often called) on the blog. 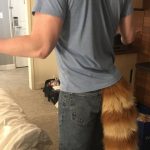 Probably the first thing I’d like to put voice to is that furries are damned friendly folks. I’ve been to other conventions (like Gencon), but FWA was a new high watermark for just how nice everyone can be while having to cram into elevators like sardines. I’m essentially an anxiety-ridden shut-in in at home, but the atmosphere around the con was so damned nice that I was largely able to put my baggage aside and have a legitimate good time around a bunch of zany strangers!

At one point, my hotel key (and the envelope with my room # that held it) slipped out of my pocket, all but inviting somebody to rob our hotel room. Instead, somebody brought it back to us within an hour of misplacing it. I wasn’t even wearing any furry paraphernalia or items to identify as some kind of “popufur” smut baron. People were just super nice and excited to be there! That or they were all on some really good drugs… early in the afternoon. My guess is the less salacious option is the correct one.

The hotel was impressive.

Friday night, we ran a panel. Maybe 20 or 30 people showed up for a trip down memory lane, some advice on making your own texty smut-games, free merch, and a bit of trivia. No, I didn’t have it recorded. If I was going to do that sort of thing, I’d need to get a fursuit head to do the entire presentation in to preserve a modicum of anonymity. I should get someone to build me a minotaur head for that next year, maybe. Shou and I had a blast, especially since we bullied UpcastDrake into showing up to talk about CoC2.

My other adventures I’ll be a bit less in-depth about, namely because they involved large amounts of intoxication. Suffice to say I wound up in a pretty cool party or two, actually danced at a rave for the first time in my life, met some cute girls who were eating ice cream with credit cards at 4am, and discovered that I’m definitely completely straight IRL. Turns 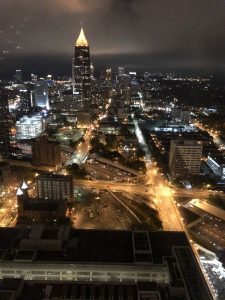 out that I’m not interested in dude dick even when completely blitzed. Sorry to the guys I (hopefully politely) turned down!

I’m going to miss Atlanta. The city looked beautiful from one of the hotel penthouses. (Meanwhile, I stayed about 30 floors below that myself.)

(Oh, and I got to meet PulsarCardinal, Strype, Kabier in an elevator, Gideon, and some other really talented artists who I’ve neglected to mention like an ignorant sack of shit. There’s a whole pile of business cards to sort through! And I bought a furry boob mousepad! Whhhheeeeee!)