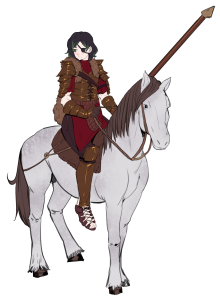 Rejoice: player pregnancies are now enabled! The first two have already been implemented, and no doubt more will come as we get more enemies.

Have a happy new year!

Jen, an officer of the Marked Merks, drawn by RattlePool.