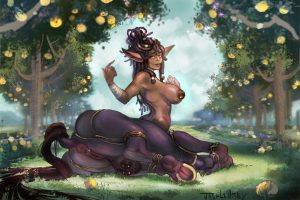 We’ve got our first new year’s patch for you with a goodly new chunk of content!

Remember that our public patches come out at the middle of the month (ish~). In the meantime, you can always get backer access here!

I’m going to be writing the actual egg-pregnancy for the hornets next week. Hopefully it will be implemented in time for said public patch. Speaking of upcoming content, art is a commission Gardeford got for a centaur NPC he’s writing for our next zone, done by Jackle0rgy.