As always, you can grab backer access here for all this goodness <3 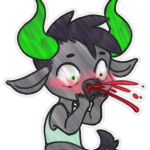 Fenoxo here! Since CoC2 just put up a new post, I’m loathe to bump it off immediately like that. Instead, I’ll attach myself to its nethers like some kind parasite.