[Backers] Bet You Thought I Was Done For the Weekend 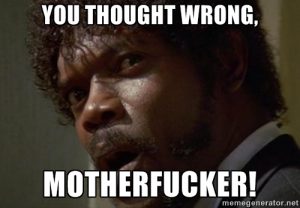 Today I was informed that there was a bunny-girl baker who makes her own glaze. I coded it. Well, all but the pregnancy parts. I’m told that Gedan is presently tangling with Codethulhu to try and get stuff all set up for the nursery, so it’s likely I’ll try and pawn that stuff off on her. Adjatha is drawing her in the sketch stages, so you probably won’t get to see a picture of her till next week.

Finally, a teaser from Kiro and her sister meeting. Don’t read if you don’t like spoilers!

Midway through a sip of her ale, the accused raccoon-woman seems utterly astonished by the prudish reaction. “What?” she asks, wiping a bit of foam from her lips. “Don’t pretend you haven’t done things a thousand times more depraved. You may have thought you escaped our little world, but I saved every snippet I could find about you on the extranet. Kiro, you once raided a convent-cruiser and deflowered half the nuns onboard. I wouldn’t be surprised if at least one was pregnant too.” She belches, sending her sizeable rack jiggling. While every bit as big as Kiro’s, it’s just a little bit softer and a lot more prone to errant wobbling. “Hell, you fucked your way to freedom after getting captured by an all-galotian gang. I could throw that holo up on a projector in a back room, if you’d like to see.”

P.S. I made a youtube video of playing the For Honor closed alpha with Savin & Co.