Home / Trials in Tainted Space / All Aboard The Progress Train

All Aboard The Progress Train 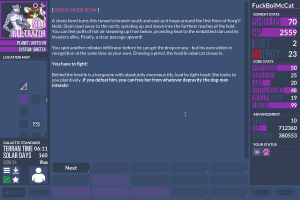 “dog-man” has been changed to “savage man” btw. MIlodan are supposed to a bit cat and dog, but they seem more cat to me.

Work continues on Korgii Hold. Two of the enemies – the infiltrator and war-lion (both male) are fairly complete, barring any additional testing. The first floor of the hold has been also been reworked. Stairways have been blocked in cave-ins and blockades. Shops have been emptied. Lund is no longer standing in a specific square. A system for randomly assigning different NPCs in the hold to be captives to the enemy encounters has been set up and tested with Heidrun and Lund.

Pictured at right, you can see the buxom korg as a captive. Below that, you can see what it’s like to rescue Lund. Yes, submissive Lund has different text.

I intend to have almost every major NPC in the hold make such an appearance, and B has written a 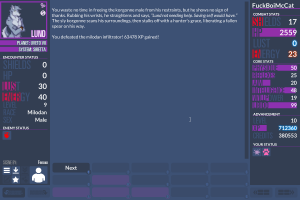 specific setup and ending for rescuing Nenne. There are also going to be some unique items scattered around as well. I intend to have the game track exactly how many korgonne you rescue (and potentially how many milos you take down) to reference at the end and factor into rewards.

I’ll be working on getting the other floors suitably described and have something for you guys to play around with featuring these two new enemies by the end of the week. I’ll have to build something to let you out of the incomplete dungeon and reset it for later, but hopefully it’s enjoyable.

QuestyRobo (and now William) are working on getting the “Milodan Temptress” enemy together. I intend to have her in next week, and with luck the final boss encounter as well.

Sorry for the slow progress. One thing I want to do this year is try and do more streams. We’ll see if I can repeat my four hour performance from earlier tonight soon.

91 Responses to All Aboard The Progress Train