May 20, 2018 Savin
ArtCorruption of Champions
49 Comments 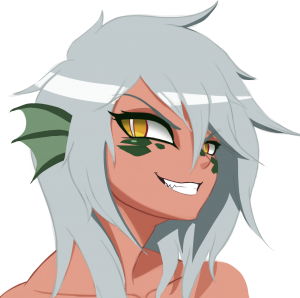 Continuing the march of implementation! Drake’s added in the Lust Combat subsystem. You can now Tease enemies into submission and Sense their weaknesses — pretty much what you expect from a streamlined version of what appears in TiTS, but I understand it was quite a bit of work hooking all the actual mechanics up under the hood. On the content side, we have a new enemy in the Foothills region: the wild Wyvern girl! She’s a tanky opponent whose hefty scales make her resistant to physical damage, but less so to Lust…

TBA: Adding Lust attacks for Cait and the Harpy Thieves. Cait’s lust attacks will be added alongside a Tactics setting that’ll let you set your companions to different strategies or damage types.

The wyvern girl’s headshot is by DCL!