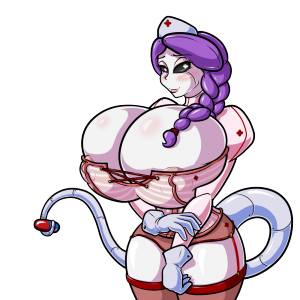 Hey guys, I noticed no one else had done an update this week, so I thought I’d pop up and touch bases on where we are on a couple things.

Monday, Dark Souls 3 happened, so not much got done on the work front. I did actually die about 50 times on my way to the tree boss. Next time I play, I’ve got to figure out how to beat that bastard. I’m pretty sure nobody was really on the clock that day aside from Shou. Apparently Savin and Gedan did get work done on Monday. I’m the only slacker.

Today (Yesterday now, I guess?), I plowed through a bunch of work, some of it dealing with tax stuff, some of it writing. I polished up the custom scene I wanted for Nayna (Short, chubby laquine scientist). It clocks in at around 3,000 words out of a 10,000 word NPC. I’m going to keep working at it tonight to add repeat text so that it can be done more than once, then maybe do something for fucking her properly (and taking her virginity).

I also added a bunch of new stuff to the bounty board, mainly requests for authors to add support for cunt tails and cock tails to fuck NPCs who cannot currently take advantage of said anatomy. I also put in ten requests for scenes that make use of hard-light panties. If we’re going to have these kinds of options, we definitely need scenes that take advantage of them.

Gedan was on the clock today as well, whipping up the coding on a TamaniCorp shop for Tavros that Savin had whipped up at some point. I thought it was supposed to be on Uveto, but I guess we might wind up with a shop on each? The shopkeeper is apparently a kaithrit male who really discovered he liked having boobs after starting to lactate, so it looks like we’ve got a shemale and a futa coming in pretty soon. If you’re a futa/shemale hater, try to hold out – the female korgonne barbarian should be ready to code pending a few minor revisions. Plus, Zeikfried is working on a male version, I hear.

I have no idea if Savin did anything besides play Dark Souls 3, so I’m just going to assume that he spent the whole day praising the sun. I cannot think of a more productive usage of time!

Fyn (male on the residential deck) has a bust from Lapinbeau loaded in game and ready to go. Hopefully we can keep the ball rolling on these characters, and finally get to the point where we can get more alternates of older characters made. Backers: expect a new build by Thursday night/Friday AM.

I wonder if I should start calling TiTS fans “bras” since they support my TITS?

31 Responses to Not Dead!