(TiTS Update: A WIP document for an enemy from the next tutorial dungeon is posted on Patreon. Wrote ~2000 words to finish a tit-fuck scene and some combat texts.)

Last week, I spoke about taking a week off to play Cyberpunk, intending to get some work done on the side. Typically, after four or five hours of a game, I’ll need a break. Instead, I played over 70 hours of Cyberpunk in a week. The game hooked me and hooked me hard, sequestering my brain inside my monitor for the duration. I don’t think I truly came up for air until after rushing for the ending over the last two days, but I’m coming back on the clock as I write this.

Now I can talk about it. I know the rest of the internet has been slinging their two cents every which way since before the game’s official release – metastasizing into a ball of virulent hate as gamers across the world dogpiled on to add their own particularly brands of grievance to the mass. I have a more positive take. Don’t get me wrong; there are a lot of legitimate issues that are worth complaining about: PS4/Xbone performance and review scummery in particular, but the game’s qualities are hardly all negative.

A lot. I love first person shooters, and I love RPGs. For a long time the only real take on this kind of game was the Fallout-Skyrim style of Bethsoft RPG which… were universally clunky to control. They had 3+ games to figure out first person controls and mouse aim and still failed every time. CDPR? They’re coming from making third person games. They did first person controls better on their virgin effort. It’s not perfect, mind you. There are other games with tighter controls – Destiny, CoD, Overwatch – and at low levels, the recoil can feel impossible, but that is not the case forever. Popping off heads feels decent. Blasting through walls with a high powered sniper is always enjoyable, even when you lack the necessary strength to reload it at full speed.

Another thing this game does well is characterization. There are less dialogue choices than you might find in something like say, Morrowind, but what’s there generally feels tight, impactful, and well written. I have no idea which choices actually influence the rest of the game, but I actually felt fully immersed in most of the dialogue scenes, like the character I was talking to was someone with actual thoughts, ambitions, and flaws (<3 Judy). I am seriously looking forward to my next playthrough where I’m going to relentlessly pursue all the side missions possible, just to see what sorts of adventures I can get into with the deadly residents of Night City and its surroundings. 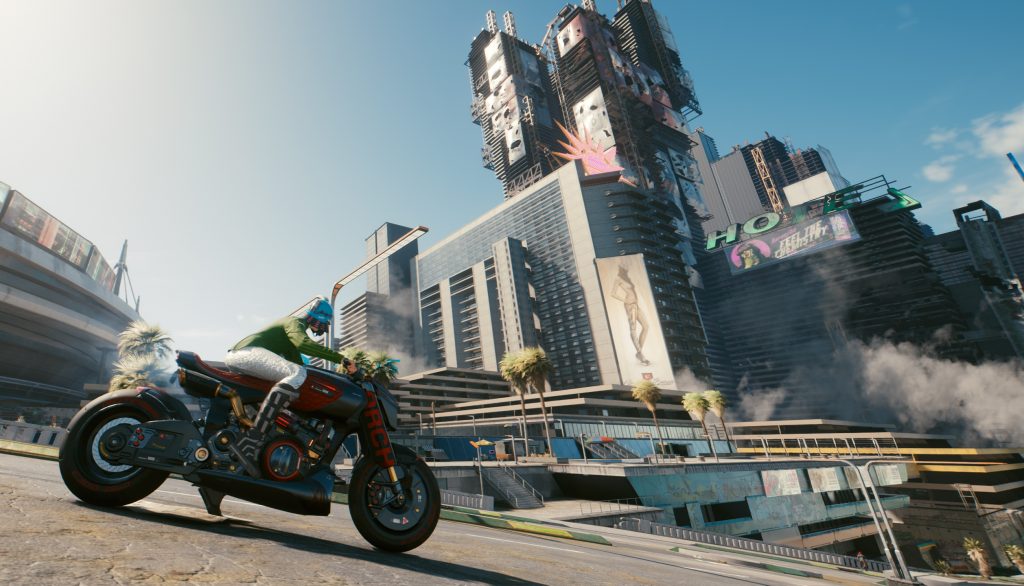 Speaking of Night City – it is an incredible, tangled beast. There are parts of the city with roads layered three deep on top of each other, all with their own glowing neon advertisements, often with shops sprinkled around between them and dense crowds of cars of pedestrians (depending on time of day). You can stop and watch kooky TV programs in stores and elevators, or gawk at the absurdity of some of the products blasting in day-glo purple out of animated posters. Obviously you can’t enter every single building, but even structures that serve as window dressing typically come with their own unique business names, signage, and aesthetic so that every part of town can seem “breathtaking” in its own way. I found myself pausing every hour or so just to gawk at vistas and screenshot possible future desktop wallpapers.

Variability of play is also huge. I was able to clear most missions entirely by hacking into a security cam and digitally rendering people unconscious – without ever being seen. It felt immensely rewarding, but I could also use the cams to mark enemies to dispatch through walls with sniper rifles, or fistfight my way in, or go classic stealth. There are usually multiple paths and multiple ways to complete most objectives, sometimes gated behind stat/skill checks (like locked doors) or just out of the way entrances – like windows or hatches on the roof.

Infiltration missions were far and away my favorites. I want more! 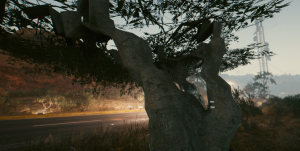 Bugs, obviously. They didn’t bother me as much as some. I’m playing on a rather high end PC, so I was able to attain lovely visuals on a 1440p widescreen monitor. My bugs tended toward harmless sources of giggles, like NPCs talking without animating their mouths or skating around on locked legs. A few times, my character would flicker into a T-pose above my car while I was driving. Once, during a very sad moment in the game, I found myself cackling like a hyena because of a specific glitch. You can see it yourself at this link, if you don’t mind spoilers from 5-6 hours in.

More troublesome bugs also occurred. When I first started the game, I tried cranking the graphics a bit higher, and it caused my entire PC to hard lock so badly that I’m still unable to use my second monitor, though I wager this is more a result of stressing my graphics card harder than every before than anything specific about how the game is programmed. Once, I summoned my car and it appeared halfway in the ground at a 45 degree angle, completely unable to be used. Several other times, it appeared merged with several other cars, resulting in damage to the vehicle or it flipping over a few times once I climbed in.

Standard city NPCs and vehicles are fucking dumb too. It’s clear that they’re window dressing for the rest of the story, which didn’t bother me much, but I know it was a dealbreaker for some. Cop spawning is sketchier than GTA as well. Once you start committing crimes, it doesn’t take long for a swarm of officers to put you in the dirt, which seemed appropriate for a Cyberpunk setting to me. You don’t go loud without doing something to prevent the cops from getting there. I’d like to see them spawn them a little further away and give them good enough AI to properly pursue you.

In general, enemies are basic but functional. This is no Halo, that’s for sure. Your foes will find cover and shoot at you, but you won’t be facing much in the way of flanking maneuvers or the varied sorts of tactics you’d see various enemy types in “pure” shooters employ. I’m kind of glad for that, because as a low-combat, hacking-focused character, being pushed more aggressively, even on normal, would have been a tremendous pain in the ass.

Lack of cosmetic customization. You can’t get a haircut. You can’t get much in the way of cosmetic cyberware. You can’t give your character big tits. The dongs are very limited. Despite a sex shop selling toys, there’s nothing you can do with any of them, and to my knowledge, they don’t impact any sex scene in the game.

The ending. Without getting into spoilers, I got the worst possible ending. For a game that lets you approach missions and NPCs with such variety, Chrono Trigger still does this far better. Cyberpunk is a setting with a plethora of options, and I’m terribly disappointed that we’re apparently limited to a half-dozen endings.

I still love this game. It isn’t perfect. It doesn’t offer as much freedom as I would have liked. The conclusion could use some more options. But I love it. I want more. I want to experience more of this city. I want them to add more interesting NPCs and more interactions with the ones that I can’t spend that much time with. I want to see vehicles expanded so that you can customize and upgrade them in GTA-like fashion. I hope they DLC more ending paths and give us expansion-sized DLCs like the Witcher 3 got.

In a sentence: Cyberpunk 2077 is deeply flawed in many areas, but is also a piece of art that I’ll be relishing for years.

In a second sentence: Don’t try to play it if you’re on a PS4 or OG XBone. You’ll be sad.