[PUBLIC | TiTS] Snakes, and Titjobs, and Lions, OH MY! 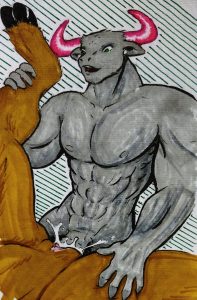 Xalt on the forums did a lovely rendition of my minotaur character! Thanks!

There are still a few changes I want to make to Lion-Os – things like setting your fur color or removing reptilian genital slits, for example, but I think it’s well past time I let you all play with what we’ve been working on. It’s a true shame that you all had to wait so long to touch this mess. Hopefully there’s enough meat on the bones of this patch to make it worth the wait!

Image Pack available for everyone this time! (Note: requires standalone flash player.) Further image pack releases will be backers-only for the rest of the month.

If you like what you play, consider backing us on Patreon or SubscribeStar!

43 Responses to [PUBLIC | TiTS] Snakes, and Titjobs, and Lions, OH MY!