Figured I’d post some info for you peeps as questions have been coming up of late, especially over the holiday period what with my inability to post builds to Patreon directly.

Firstly, only Fenoxo can actually post TiTS builds to Patreon, and it’s kind of a laborious process that we can’t easily automate or anything. That said, we also wanna start pumping out builds on a more regular basis- the last few weeks should be a good indicator of what we can do when all the annoying busy work of preparing builds is all handled automatically. (By hand, it is no-shit about 40-50 minutes of tapping fingers whilst waiting on compilers and file uploads).

I also wanna really put some time down on figuring out the nitty-gritty about the imagepak enabled build too. We kinda have the system working (and have for a long time), but not really having enough art to kick it off combined with questions about how we should distribute it have kinda held us back on it a little bit; one of the test versions I kicked together was over 100mb, and all that really had in it was high-res versions of all the busts, so we ideally need to find a way to bring that down somehow, especially between build updates! It’s pretty clear that it would be a nightmare to distribute purely through Patreon at that size period, so it’s likely that it would only ever be regularly kept up-to-date through the blog.

To get around all of that, the user accounts here on the blog can be tied to your Patreon info. If you make an account here and go look at the Profile page that’ll show up in the menu whilst you’re logged in, down the bottom there’ll be some options for linking to either old Offbeatr or current Patreon pledges. Smash-click that big old orange button and you’ll be taken to the Patreon site to confirm you wanna let the blog access your TiTS pledge info. Then you’re done! The blog will know you’ve pledged (and for how much), and let you access a bunch of stuff through a new menu specially for backer builds. 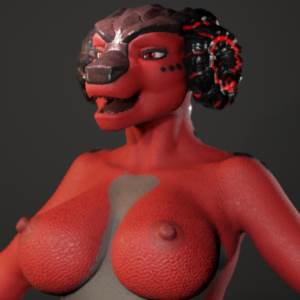 As a side note, the system had a few issues during the server migration. The keys we use to keep everything tied together only have a short duration before they expire, and unfortunately it took me longer than the expiry time for some of the keys to get everything moved over. If you’ve got any issues, try resetting the Patreon connection – look in the same place you first clicked that big orange button and there should be an option to remove the binding. Once you’ve removed it you can try adding it again, which will generate a new set of keys, but it also requires granting access to the blog again which is why I can’t do much about it for you! If you still have issues after that, send us an email so we can look into things.

As a note though, I’m going to manually clear out all of the keys and remove all of the bindings when we do the next public build, probably some time in the next couple of days, so we can get a clean start (and my logs aren’t full of key access errors). The public build will also arrive with a new solution for public source code access too, for all of you that were waiting for that.